Posted on September 27, 2017 by ACTheologian 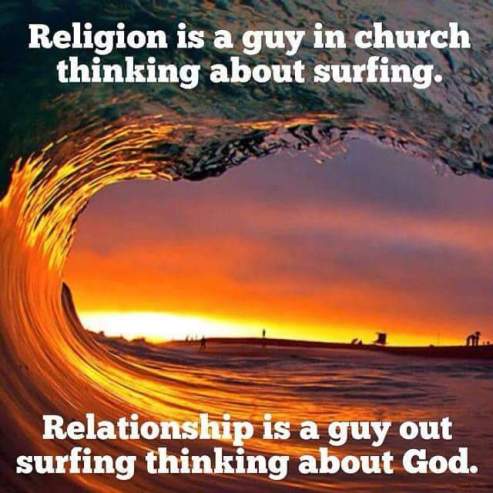 Just a disclaimer for the reader, I will be leaning heavily on Lutheran theology in this post.  If you have never heard the word “sacrament” before you may want to read my series on Soteriology before proceeding.

This is my second post in an on-going series on Meme Theology.  This meme stuck out to me because the concept is actually pervasive in american pop-christian culture and it’s worth talking about.  The author seems to be drawing a dichotomy between religion and relationship.  His point as I understand is that relationship has more substance to it and that we should avoid religion.

Before I interact with the meme I would like to take a look at the word religion.  With or without the meme, how should we define it?  It’s not a Biblically defined term anyways.  We would expect the meaning to change over time.  To do that I would like to compare the definitions of an older dictionary to a newer one.

I have selected the number #1 definition from the 1828 Websters and set it alongside that found in Dictionary.com.

One thing that stands out to me is that in 1828 Websters monotheism seems to be assumed as a premise.  In the modern dictionary we are not seeing this.  I just find that interesting, at the very least we can say the meaning of the word has flattened over the past 200 years.  That said, both renderings essentially break the word down into practice and theology,  something you do and something you believe.

This isn’t how the meme author uses the word though.  He pits the two against each other.  In the authors mind religion is something you only believe or think about and relationship is something you do.  At the very least it’s fair to assume he is using unique definitions of these terms.  Because I am familiar with evangelical cliches I am going to assume that he means something close to:

I don’t know who originally coined it but it can’t have been that long ago.  As I understand, the sentiment that is intended is that the ‘smells and bells’ of a liturgical service are supposed to be dead and lifeless, and that in it’s place one should seek a more spontaneous personal relationship with Jesus.

This relationship can vary in definition and is generally conveyed in a way that can be interpreted however you personally prefer it to be.  It could be simply a life marked by charity and good will, daily devotional readings, a warm gooey feeling in your heart that you refer to as God,  adding an acoustic guitar to your music service, or all of the above.

To be honest I completely understand the sentiment.  Something about my generation in particular is that we long for substance.  Old symbols and traditions can feel lifeless and intangible, particularly amongst American evangelicals under-girded by a Zwinglian theology that denies the sacraments.  There is no actual substance, it has long been rejected centuries before any of us were born, so we cling to other things and call it a relationship.  That is my observation anyways, your mileage may vary.

Do we have a personal relationship with Jesus Christ?  Well sure, but I would call it a one-sided relationship.  He has died for us, and delivers his body and blood to our mouth.  He has poured his death burial and resurrection over us and into us in the waters of our baptism.  It is a relationship of him coming to us and saving us even though we constantly sin against him.  So in that sense, I would say that Christian religion is also relationship.

Your good works will never be good enough to bring you closer to God.  That warm gooey feeling in your heart has more to do with the jalapenos in your breakfast than it does the presence of God the Holy Spirit.

The meme is incoherent to me because I don’t understand how I could get any closer to Jesus than eating his flesh and drinking his blood, and at the moment the only place my church offers that is under the steeple.  I want to be where that is offered.

I am a layman who blogs my Biblical studies. Enjoy, please read with an open Bible and do double check with your pastor.
View all posts by ACTheologian →
This entry was posted in Armchair Lounge, Meme Theology and tagged Relationship, Religion, SACRAMENT. Bookmark the permalink.