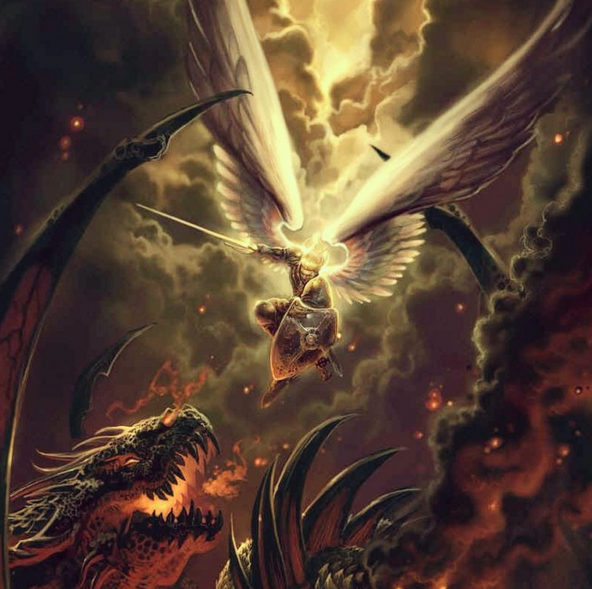 One of the distinctives of the Seventh Day Adventist Church is that they believe all accounts of Micheal the Archangel are pre-incarnate appearances of Jesus Christ.  Another term for this is “theophany”.  Early in the SDA Church they took this one step further and taught that Michael was a created angel who ascended to equality with God at a point in time before the Creation of Earth.

In my opinion they hold to theophany today out of a desire to confess the Deity of Christ and the teachings of Ellen White at the same time.  This is a concept I delved into in an older post which you can find HERE.

Below I am going to present a sample of proof-texts that SDA use as their strongest Biblical case for Michael the Archangel actually being Jesus.  I am going to put the Clear Word verses right next to the ones from the Bible.  Let’s see whether or not the Seventh Day Adventists felt the need to change the Biblical text in order to support their doctrines.

What I want to point out in the Clear Word version on the right is that the author is using a capital “H” for all the singular male pronouns.  This is a unique feature consistent throughout the Clear Word.  The author has done this anytime that he is referencing God.  In and of itself this is fine, especially for a paraphrase.  The problem is that this verse in Daniel isn’t talking about God it is talking about Michael the Archangel.  For whatever, reason, the author felt the need to add the teaching of Michael being God in here.  Why would he want to make such an addition?

What is up with this new story about Moses being resurrected during this transaction?  The Bible doesn’t have a bodily resurrection of Moses account.  If anything it teaches the opposite, Jesus Christ is the first fruits of the Bodily Resurrection of all believers, not Moses (1 Cor 15:22-23).

Changing the “Lord” buried him to the “angels of the Lord” is not a big deal in my opinion.  Just because God may have delegated doesn’t mean he didn’t do it either, both statements can be true.  This would make sense especially when read alongside Jude 1:9 above.  In all likely-hood Michael was the one who was burying Moses body when he had some words with the Devil.

There is however no resurrection account here in Deuteronomy.  The Bible never teaches a bodily Resurrection of Moses.  He simply died and went to heaven like anyone else in Christ.

Notice in the Holy Bible we have different nouns assigned to different verbs.  We see the Lord descent with a cry of command.  Alongside him his the voice of an Archangel, and it looks like someone else is blaring on the trumpet.  The most likely verb causing the dead to rise is the command of God.  Everything else is simply attending angels praising the Glory of God and the event at hand.  There is no reason in the text to assume that the voice of the archangel or the sound of the trumpet is raising the dead.  Every time that the dead have been raised in scripture it has been by God’s command anyways.

In the Clear Word this verse has been completely reconfigured.  Notice that the words “as the archangel” have replaced “with the”.  The Clear Word is directly referring to the Archangel as Jesus where as the Holy Bible does not.  The Clear Word also equates the shout, trumpet, and command as being the same thing rather than leaving them as a separate verbs.

I don’t believe that Michael the Archangel is Jesus.  I certainly believe he is a highly placed created angel that is delegated tasks that are in line with his position in heaven.  But the case for him being Theophany isn’t strong enough when one only relies on the Bible.  Because of that I don’t see the need to speculate or to draw any hard and fast conclusions.

SDA cannot hold this doctrine in speculation though, it has to be dogma.  The reason is because if they give it up they would have to either leave Ellen White or become fully Arian.  Because of this they have a strange certainty about believing that Michael is theophany.  Clearly, based on the above they feel so strongly about this that they had to alter the Bible to support it.  If the Bible were clearly teaching that Michael was Jesus then it would be as firm on the doctrine as the Clear Word is.

I am a layman who blogs my Biblical studies. Enjoy, please read with an open Bible and do double check with your pastor.
View all posts by ACTheologian →
This entry was posted in Leaving Adventism, The Clear Word and tagged Heresy & Heterodoxy. Bookmark the permalink.

2 Responses to Clear Word vs Bible: Michael the Archangel