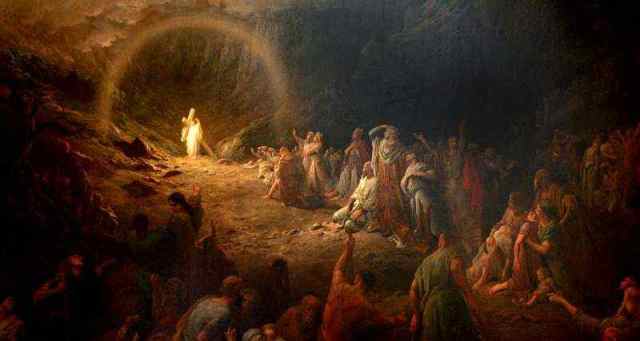 Believe it or not the Decent of Christ to Hell is a controversial doctrine today.  In my opinion this is partially due to the way people have abused the doctrine in the past.  For example, some will say that Christ suffered in Hell in our stead, and that this act is part of the atonement made for sin.  In response, there are many that deny Christ’s Decent altogether.

What does the Bible say?  Are there clear passages that teach a decent to Hell?  Did the early church believe in the Decent to Hell?  Why do people abuse or outright deny it today?  This post is going to be an attempt to answer these questions.

Is Christ’s Decent to Hell Biblical?

The answer to this question is easy, yes it is very Biblical.  Take a look at the passages below and see for yourself.

“9 (In saying, “He ascended,” what does it mean but that he had also descended into the lower regions, the earth?  10 He who descended is the one who also ascended far above all the heavens, that he might fill all things.)” Ephesians 4:9-10 ESV

Above you have a juxtaposition between the lower regions and heaven.  If you want to be obstinate you could assert that lower regions is simply the Tomb, but it doesn’t really fit the imagery conveyed in this text.  The clash of two spiritual opposites fits better with the narrative in my opinion.

“18 For Christ also suffered once for sins, the righteous for the unrighteous, that he might bring us to God, being put to death in the flesh but made alive in the spirit, ; 19 in which he went and proclaimed to the spirits in prison, ; 20 because they formerly did not obey, when God’s patience waited in the days of Noah, while the ark was being prepared, in which a few, that is, eight persons, were brought safely through water.” 1 Peter 3:18-20 ESV

Trying to deny Christ’s Decent in the above passage is just a rebellion against scripture.  Clearly Peter is referring to the location in which those who drowned in the flood currently reside.  To read it any other way requires Eisegesis on some level.

Hades is simply another word for Hell in the new testament.  Not the Hell after the white throne judgement, but rather the prison that we see spoken of in 1 Peter 3 and Luke 16.  The plainest reading of the above verse is that Death and Hades are something that Christ has conquered.  Which of course fits the victory lap imagery we get in the passage from 1 Peter.

When I see people oppose this doctrine what they generally have to presuppose is that Christ is not omnipresent.  For example, Jesus said that he would be in Paradise with the thief on the Cross in the passage below:

The verse above is not the only one that I’ve seen used, but the idea is the same.  Those who deny the decent argue that since Christ was located in X he could not have also been located at Y.  This doesn’t work though because you have to claim that Christ isn’t or can’t be omnipresent.  There are plenty of passages that support the omnipresence of Christ (Eph 1:23) (Luk 24:36-39)(Joh 20:19-20)(Mat 26:26).

Not to mention the fact that denying the ability of Christ to be omnipresent equates to a denial of the Deity of Christ.  Based on that I assert there exists no contradiction between Christ’s statements on the Cross and those teaching the Decent to Hell.

Did the Early Church Believe in Christ’s Decent to Hell?

This is also very easy to answer, yes they did.  The decent to Hell is clearly confessed in the Apostles Creed, one of the oldest confessions of faith that we have in Christianity.

“I believe in God the Father Almighty, Maker of heaven and earth.

And in Jesus Christ, His only Son, our Lord; who was conceived by the Holy Ghost, born of the Virgin Mary; suffered under Pontius Pilate, was crucified, dead, and buried; He descended into hell; the third day He rose again from the dead; He ascended into heaven, and sitteth on the right hand of God the Father Almighty; from thence He shall come to judge the quick and the dead.

I believe in the Holy Ghost; the holy catholic* Church, the communion of saints; the forgiveness of sins; the resurrection of the body; and the life everlasting. Amen.” – Apostles Creed

* catholic means “universal” and is not a reference to the Roman Catholic Church.

Did Christ Complete the Atonement in Hell?

This is usually where you start having problems with the Doctrine of the Decent to Hell.  Many have fallen into error by speculating as to exactly what Christ was doing and why he did it.  The Bible doesn’t supply much in the way of details.

I think it is fair to look at the word “proclaimed” as a victory lap of sorts as to what was just accomplished on the Cross.  It is really the only verb that we have talking about what Christ did in Hell.  To speculate beyond that is just going to lead one into error.  In fact, this is exactly what the Lutheran Confessions teach, see below:

“And since even in the ancient Christian teachers of the Church, as well as in some among our teachers, dissimilar explanations of the article concerning the descent of Christ to hell are found, we abide in like manner by the simplicity of our Christian faith [comprised in the Creed], to which Dr. Luther in his sermon, which was delivered in the castle at Torgau in the year 1533, concerning the descent of Christ to hell, has pointed us, where we confess: I believe in the Lord Christ, God’s Son, our Lord, dead, buried, and descended into hell. For in this [Confession] the burial and descent of Christ to hell are distinguished as different articles; and we simply believe that the entire person, God and man, after the burial descended into hell, conquered the devil, destroyed the power of hell, and took from the devil all his might.  We should not, however, trouble ourselves with high and acute thoughts as to how this occurred; for with our reason and our five senses this article can be comprehended as little as the preceding one, how Christ is placed at the right hand of the almighty power and majesty of God; but we are simply to believe it and adhere to the Word [in such mysteries of faith]. Thus we retain the substance [sound doctrine] and [true] consolation that neither hell nor the devil can take captive or injure us and all who believe in Christ.” – Solid Declaration, Article IX, Christ’s Decent to Hell

My issue with denying Christ’s Decent to Hell is not so much what is lost when the doctrine is removed but rather the approach one has to take to deny it.  There are clear passages teaching this Decent, and to abbrogate them with other verses requires a Biblicist/Polemic approach which I firmly reject.

At the end of the day this is what we are actually talking about.  Should we approach the Bible in a magisterial fashion bending it and twisting it to comply with a systematic theology?  Or should we approach it in a ministerial fashion submitting to the Word and trying to discern how all passages can be true at the same time?  The later is the course that I think is correct, and that is why I accept Christ’s Decent to Hell.

I am a layman who blogs my Biblical studies. Enjoy, please read with an open Bible and do double check with your pastor.
View all posts by ACTheologian →
This entry was posted in Armchair Lounge, Great Controversy, Uncategorized and tagged Christology, Eschatology. Bookmark the permalink.