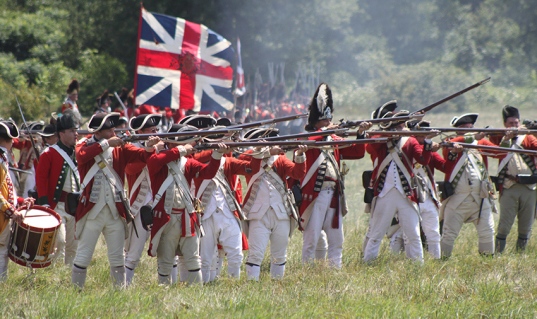 One of the interesting things found in the writings of Ellen White is the prophecy given by her that the United States would be invaded during the Civil War.  This is given by her in the form of a dire prophetic warning.  Read the following excerpt from Volume 1 of Testimonies to the Church.  Attempt to read it as someone who doesn’t know the outcome of the war.

“Said the angel: “Hear, O heavens, the cry of the oppressed, and reward the oppressors double according to their deeds.” This nation will yet be humbled into the dust. England is studying whether it is best to take advantage of the present weak condition of our nation, and venture to make war upon her. She is weighing the matter, and trying to sound other nations. She fears, if she should commence war abroad, that she would be weak at home, and that other nations would take advantage of her weakness. Other nations are making quiet yet active preparations for war, and are hoping that England will make war with our nation, for then they would improve the opportunity to be revenged on her for the advantage she has taken of them in the past and the injustice done them. A portion of the queen’s subjects are waiting a favorable opportunity to break their yoke; but if England thinks it will pay, she will not hesitate a moment to improve her opportunities to exercise her power and humble our nation. When England does declare war, all nations will have an interest of their own to serve, and there will be general war, general confusion. England is acquainted with the diversity of feeling among those who are seeking to quell the rebellion. She well knows the perplexed condition of our Government; she has looked with astonishment at the prosecution of this war—the slow, inefficient moves, the inactivity of our armies, and the ruinous expenses of our nation. The weakness of our Government is fully open before other nations, and they now conclude that it is because it was not a monarchial government, and they admire their own government, and look down, some with pity, others with contempt, upon our nation, which they have regarded as the most powerful upon the globe. Had our nation remained united it would have had strength, but divided it must fall.” Testimonies for the Church, Vol. 1, p. 259

What stands out for me is a few themes.  First of all we see a bold declaration from an angel that “This nation [United States] will yet be humbled into the dust”.  This isn’t a conditional statement either, notice there is no warning to stand for or against slavery to stave off this dire end.  It is simply a declarative statement of the future.

After that we get some dialogue describing the current state of mind in England.  I don’t know if Ellen White means the thoughts and feelings of the English in general, or if she is providing insight into the council of the Queen.  This isn’t clarified.

“Other nations are making quiet yet active preparations for war”

“A portion of the queen’s subjects are waiting”

Above we see that this anthropomorphic England is weighing the pros and cons of going to war.  Ellen White then moves from the present to the future in her narrative by saying the following.

“if England thinks it will pay”

“When England does declare war, all nations will have an interest of their own to serve, and there will be general war, general confusion.”

Putting both statements together the only possible conclusion is that Ellen White is saying that England will think about and then come to the conclusion that going to war will “pay” because she qualifies it in time by using the word “when”.  Thus the decision process is already resolved later in the scope of her prophecy.  Had she instead said “If England…” then one could claim a conditional prophecy.  But since she declares “When England…” we have a declarative statement of what she foresees will happen in the future.

Putting that together with the angelic declaration that America will be ground into the dust, a referent which can only be tied in the text to England invading the states, one is left with the conclusion that Ellen White predicted such an event as if it was set in stone.  Either Ellen White got it wrong or the messenger speaking to her changed their mind.  Either has profound implications as to the source of her visions.

As to what happened in history we can discern whether or not England invaded America by doing a little Research:

“The United Kingdom and its empire remained officially neutral throughout the American Civil War (1861–65). It legally recognised the belligerent status of the Confederacy; it never recognized it as a nation and never signed a treaty or exchanged ambassadors.” – Wikipedia

“Altogether different [than the British attitude to the Schleswig-Holstein crisis] was the tone adopted by the British Government in relation to the great civil war which broke out in the United States of America early in 1861. There the attitude assumed was one of determined neutrality. The Southern States declared their right to separate themselves from the union and form a distinct confederation. Their ostensible reason for doing so was the claim of the central government of the whole body to exercise over the separate states a larger control than it was entitled to in the eyes of those states. The immediate cause was the growing determination of the Northern States to abolish slavery.

British neutrality
The Northern States denied the right of secession, claiming that the union was a “federal” one, in which case the attempt at separation is rebellion. The Southern States claimed that the Union was a “confederation” from which any member is entitled to separate itself. Hence the names “Confederates” applied to the Southern States and “Federals” applied to the Northerners. The British Government declined to judge between them.” – Britain Express

“The civil war was fought between the Union states (Northern states) of the United States and the states of the Confederacy (Southern States). There were many causes of the civil war, including differences between northern and southern states on the idea of slavery, as well as trade, tariffs, and states rights.” – Civil War Facts – History Net

The fact of the matter is that Ellen Whites prediction simply didn’t come true.  Unless one can find proof that England did invade the states and that it was covered up or something I am going to have to leave it right there.