In the writings of Ellen White there are two curious statements that she makes about something she calls amalgamation.

“But if there was one sin above another which called for the destruction of the race by the flood, it was the base crime of amalgamation of man and beast which defaced the image of God, and caused confusion everywhere. God purposed to destroy by a flood that powerful, long-lived race that had corrupted their ways before him.”–Spiritual Gifts, vol. 3, p. 64.

“Every species of animal which God had created were preserved in the ark. The confused species which God did not create, which were the result of amalgamation, were destroyed by the Flood. Since the Flood there has been amalgamation of man and beast, as may be seen in the almost endless varieties of species of animals, and in certain races of men.”–Page 75.

Dictionary.com defines the word as follows: 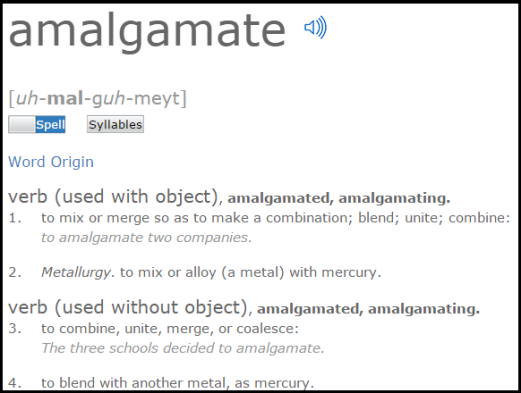 Putting her statements together it is fair to guess that she is talking about the DNA of men and animals mixing together like one would get form a horse and a donkey birthing a mule.  But what she means specifically is hard to tell, one has to speculate.  Does she mean people breeding with animals or some kind of genetic experimentation?  The later would have to assume that the antediluvians were an advanced race, which is a claim some SDA make.

What concerns me is that she indicates that the results of the post flood amalgamation is still in certain races of men today.  What does she mean by that?  Due to the fact that she lived in a very racist time I am forced to conclude that she meant it in a racist fashion.  As if to say some races she was familiar with are more animal in nature than others.

Since Ellen White didn’t elaborate I am forced to turn to those who knew her while she was alive.  I believe it is fair to look at how they interpreted her words and then to see if she rebuked them for being in error.

Below is Uriah Smith’s defense and explanation of Ellen G. White’s “amalgamation” vision.

“The visions teach, says the objector, that the negro race is not human. We deny it. They do not so teach. Mark the  language: “since the flood there has been amalgamation of man and beast, as may be seen in the almost endless varieties of species of animals, and in certain races of men.” This view was given for the purpose of illustrating the deep corruption and crime into which the race fell, even within a few years after the flood, that signal manifestation of God’s wrath against human wickedness. There was amalgamation; and the effect is still visible in certain “races of men.” Mark, those excepting the animals upon whom the effects of this work are visible, are called by the vision, “men.” Now we have ever supposed that anybody that was called a man was considered a human being. The vision speaks of all these classes as races of men; yet in the face of this plain declaration, the foolishly assert that the visions teach that some men are not human beings! But does any one deny the general statement contained in the extract given above? They do not. If they did, they could easily be silenced by a reference to such cases as the wild Bushmen of Africa, some tribes of the Hottentots, and perhaps the Digger Indians of our own country, &c. Moreover, naturalists affirm that the line of demarkation between the human and animal races is lost in confusion. It is impossible, as they affirm to tell just where the human ends, and the animal beings. Can we suppose that this was so ordained of God in the beginning? Rather has not sin marred the boundaries of these two kingdoms? But, says the objector, Paul says that “God hath made of one blood all nations of men for to dwell on all the face of the earth,” and they add, “Which shall we believe, Paul or E. G. White?” You need not disbelieve E. G. White, in order to believe Paul; for there is no contradiction between them. Paul’s language will apply to all classes of men who have any of the original Adamic blood in their veins; and that there are any who have not this, is not taught by the visions, nor claimed by any one. But for this text to weigh anything in favor of the objector, he must take the ground that God made every particle of blood that exists in any human being. Is this so? Then God made all the scrofulous, leprous, or syphilitic blood that courses in the worst transgressor’s veins! From any view which leads to such a blasphemous conclusion we prefer to be excused. . . . Whatever race of men we may take, Bushmen, Hottentots, Patagonians, or any class of people, however low they may apparently be in the scale of humanity, their mental capabilities are in every instance the basis on which we are to work, and which we determine whether they are subjects of moral government or not. Then what about all this ado over the charge, which is itself false, that the visions teach that the negro is not a human being? What does it amount to? It is simply an effort to create prejudice in the minds of the people, unworthy any one who makes any pretensions to being a Christian or even a gentleman.” Uriah Smith, “The Visions—Objections Answered,” Advent Review and Sabbath Herald, 31 July 1866, pp. 65-66.

To his credit Uriah Smith deflects interpreting her comments as a remark against those of African decent in general.  It would have been easy for him to do so in the age that he lived in, he wouldn’t have gotten much criticism.

The problem is that the way he deflects it is to lower the humanity of others such as the bushmen, hottentots, or pategonians.  He suggests that we are to evaluate their mental capabilities to discern how much humanity is in them, if any, and then likens any found failings to a disease, and thus not created by God.  I find this last notion quite absurd as it implies anything bad wasn’t created by God.  As if to say he couldn’t judge the world with the flood if he wanted to, when taken to its logical conclusion.  But that is beside the point.

My argument is this, Uriah Smith did provide an interpretation of the text.  Also, he was a prominent leader in Seventh-Day Adventism.  It stands to reason that Ellen White would have heard or read his statements.  She had every opportunity to rebuke or correct him but did not.  Irregardless of how you interpret her amalgamation statements, her failing in rebuking Uriah Smith  demonstrates either agreement or a lack of prophetic insight on her part.

When I present this to SDA they tell me that she is only human and is allowed to make such mistakes and false prophecies.  The problem with that statement is that it argues that all prophets are allowed to be wrong.  Logically, that would also allow for Joseph Smith and Mary Baker Eddy, both of whom SDA reject.

There is no getting around this.  If one is to hold Ellen White as a prophet of God then they must also believe that certain races of men are either less than human or not human at all.  Something to consider.

I am a layman who blogs my Biblical studies. Enjoy, please read with an open Bible and do double check with your pastor.
View all posts by ACTheologian →
This entry was posted in Ellen White, Leaving Adventism and tagged Ellen White, False Prophet, Heresy & Heterodoxy. Bookmark the permalink.