The Nature of Man

Posted on January 6, 2016 by ACTheologian

This is the seventh post in a series on the Great Controversy.  For the previous post please click HERE.  Each post builds on themes and arguments presented so if you have not read my others I recommend starting with the first by clicking HERE.

For the Great Controversy to work unregenerate man must posses a salvifically relevant free will.  By that I mean, such free will  must have the cosmic power to in some way assist in ones own salvation and alter or impact the divine Will of God.

Those familiar with this topic know how heated it can get philosophically. Rather than go there this post instead will focus on what has been revealed in scripture as compared to the teachings of SDA.

“It is necessary that the truth about God, Christ and Satan be made manifest. The real story of all three is involved in the cosmic controversy. The revelation of who they really are must be made so that all created beings, angelic (fallen and unfallen), humans (redeemed and lost) and the unfallen inhabitants of worlds afar, may all vote unanimously on who is right and who is wrong. Only one side can win, yet all from both sides must vote, and vote the same. This is done with complete freedom, and is done purely on the evidence given by both sides.” The Cosmic Controversy: World View for Theology and Life. , Norman R. Gulley, p. 85

Above you can see that the SDA teacher is stating we are choosing sides in this “Great Controversy”.  You pick the side that you want to be on and that it is a matter of free will.  Rather than God glorifying himself in salvation this presents a theology of glory on the part of man by choosing under our own power the right side of a cosmic conflict.

“Jesus employed no miraculous agency to compel men to believe in him. They were left to choose or reject him, of their own free will. No direct power was to force them into obedience, and destroy the free moral agency that God has given to man.” Ellen White, Redemption: or the Teaches of Christ, The Anointed One, Pg 83

Is it true that Jesus doesn’t use a miraculous agent to compel us?  What does the Bible say about this?  If we are left to our own free will one could logically argue that we are helping God save us.  As if to say that his death on the cross wasn’t enough and he needs our help to make up the difference.  I realize nobody actually confesses that in those words, but it is the logical conclusion of decision theology.

“Do you want to be healed from your sins? Heed the invitation of Christ. Come to Him of your own free will, and put yourself under the care of this mighty Healer. Then Christ can say to you as He did to the poor paralytic, “Thy sins be forgiven thee.” “Rise, take up thy bed, and walk.” Ellen White, Letter 77 (May 1, 1889)

This quote above is teaching that when you do use this self regenerating power of free will then Christ has the ability to operate in a miraculous sense.  Is that really what the Bible teaches?  Is God’s power limited by our free will?

Just to be clear, I am going to state that I do believe free will exists.  My argument is not that free will doesn’t exist. Instead my argument is that it is not relevant with regards to salvation.  It just doesn’t matter and certainly doesn’t help God save you.

“Who hath delivered us from the power of darkness, and hath translated us into the kingdom of his dear Son” Col 1:13 KJV

“1 And you hath he quickened, who were dead in trespasses and sins; 2 Wherein in time past ye walked according to the course of this world, according to the prince of the power of the air, the spirit that now worketh in the children of disobedience:; 3 Among whom also we all had our conversation in times past in the lusts of our flesh, fulfilling the desires of the flesh and of the mind; and were by nature the children of wrath, even as others.; 4 But God, who is rich in mercy, for his great love wherewith he loved us,; 5 Even when we were dead in sins, hath quickened us together with Christ, (by grace ye are saved;); 6 And hath raised us up together, and made us sit together in heavenly places in Christ Jesus:; 7 That in the ages to come he might shew the exceeding riches of his grace in his kindness toward us through Christ Jesus.” Eph 2:1-7 KJV

According to the 1611 KJV Dictionary “Quickened” means being made alive, especially in a spiritual sense: 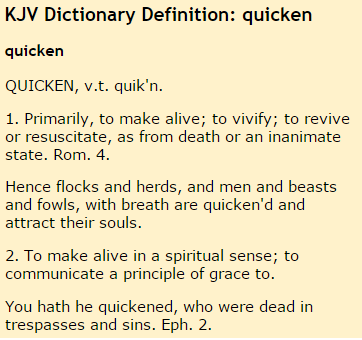 So to break this passage down, it is saying that those who are “quickened” now were once dead.  This is where the concept of spiritual death and life come into play.  In this state of spiritual death the scriptures describe us as:

[in] the power of darkness

lusts of our flesh

After this Paul changes gears and describes the impact of God’s actions upon that state.

shew the exceeding riches of his grace

Ask yourself this question, what state does the text say we are in before we are saved and who does it identify as the one changing that status?  Are those verbs attributed to you or to God?

Here is an analogy, have you ever seen a dead body before?  Most of us have, even if not a person it could have been a pet or animal.  If you plead and yell at the top of your lungs will the corpse get up?  No they are dead and cannot do anything.  Does this inability on the part of the corpse mean that they didn’t have free will?  No it doesn’t it means that their free will is irrelevant in a state of death.

Above Paul is teaching that we are spiritually dead.  Though you can move and speak and fulfill your vocation you cannot make a decision for Jesus.  Your body is alive but inside you are a corpse.  This corpse inside of you cannot get up and do anything in a spiritual sense except to be dead in sin.  No matter how sappy the music is in the altar call it cannot bring a sinner to penitent faith in Christ.  The scriptures teach that this is a miracle, a work of God.

“For by grace you have been saved through faith. And this is not your own doing; it is the gift of God, ; not a result of works, so that no one may boast.” Eph 2:8-9 KJV

Read the verse above, and notice that both the faith and the grace are a gift.  This is not something you are giving yourself, God is giving it to you.  it is logical then to ask how God gives that gift.  This is explained elsewhere in Paul’s writings.

Above in Romans we see that this gift of faith is given by the preaching of the Word.  This is one of the reasons why going to church is important and relevant.  It is not something you do for God, at church you receive faith as a gift from God through the preaching of his Word.  If the pastor isn’t rightly preaching the Word there is really no point, find another church!

You can’t give this gift of faith to yourself, you can’t muster it up and strain hard to have it.  You cannot choose to have it,  it has to be given to you.

With a proper biblical understanding of the Nature of Man you cannot have free moral agents capable of choosing one side or the other in a Great Controversy.  Instead you have an Almighty God stepping into a lost and broken world saving mankind for his Glory.  He bled and died on the cross taking your sins to the grave so that you don’t have to.

“Now I would remind you, brothers, of the gospel I preached to you, which you received, in which you stand, ; and by which you are being saved, if you hold fast to the word I preached to you—unless you believed in vain.; For I delivered to you as of first importance what I also received: that Christ died for our sins in accordance with the Scriptures, ;  that he was buried, that he was raised on the third day in accordance with the Scriptures” 1 Cor 15:1-4 KJV

“He himself bore our sins in his body on the tree, that we might die to sin and live to righteousness. By his wounds you have been healed.” 1 Pet 2:24 KJV

So, do we have free will?  Well the answer is yes, but it’s not relevant for salvation.  When it comes to salvation I would argue that our free will is like that of an ant in an ant farm.  Sure they can choose which tunnel they are gonna take but they can’t change their situation.  The variables to themselves and to their environment are simply too limited.  Instead, God steps into time and saves us like he did Peter.

That’s not a Great Controversy with equal players on a field of battle. That is the act of Creator God upon a creation subject to his will.

I am a layman who blogs my Biblical studies. Enjoy, please read with an open Bible and do double check with your pastor.
View all posts by ACTheologian →
This entry was posted in Great Controversy, Leaving Adventism and tagged Free Will, Monergism, Salvation, Synergism. Bookmark the permalink.

4 Responses to The Nature of Man