Age of the Earth

In a previous entry I made it clear that I believe the Bible teaches 6 literal 24 hour days of creation.  You can find that by clicking HERE.  In this post I am going to address the time that has transpired since the fall.  It can be debated as to whether or not the traditional view is the 6000 year model attributed to the work of James Ussher.  However, for the sake of simplicity I am going to refer to his work as the traditional view.

Even if one ignores James Ussher, if you add up all of the genealogies in the Bible it is true that you have about 6000 years to work with.  Below is a graph illustrating this point below. 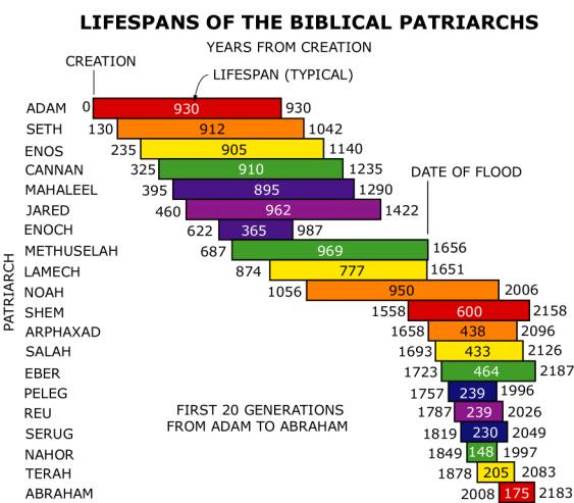 For the source of this image please click HERE.

In the above chart we see the lifespan and lineage of the Biblical Patriarchs in Genesis.  If you assume that there are no gaps in these genealogies you end up at 6000 years or so since the fall.  This is because it is pretty easy to date backward to Abraham thanks to the clarity we find in Paul’s writings.

“Now to Abraham and his seed were the promises made. He saith not, And to seeds, as of many; but as of one, And to thy seed, which is Christ.  And this I say, that the covenant, that was confirmed before of God in Christ, the law, which was four hundred and thirty years after, cannot disannul, that it should make the promise of none effect.” Gal 3:16-17 KJV

Above Paul is referring to the amount of time between Abraham and Moses.  Which would have been around 430 years in total.  The time between Moses and today is relatively fixed.  Different scholars place him and different points of history but it doesn’t vary that much.  This would mean that the time of Abraham wouldn’t vary too much either.  Reaching back to the patriarchs and attempting to place them on a calendar is not so easy though.

In order to do this many date back the Biblical genealogies. The problem with this is that the age of the Earth is not a formal or even informal topic of scripture.  One has to piece the available genealogies together and make assumptions.  Because of that I would avoid being dogmatic either way, as doing so is not a fight for Biblical authority.

Many scholars today argue that the Genealogies of the Patriarchs were condensed.  They argue that this is a common practice in ancient documents to save space on expensive parchment and or to arrive at pleasing round numbers.  I argue that telescoping of these genealogies is certainly possible, and would explain a lot if true.  I am going to present the argument for this theory that convinced me.  If you want an in-depth verse by verse analysis arguing for telescoping please click HERE.

Below is a quote from that article found on GodandScience.org focusing on the words at use in ancient Hebrew and Greek.

“Another important difference between ancient and modern genealogies is vocabulary. In modern English, we have a whole host of words to describe precise familial relationships. For example, we have son, grandson, uncle, father, cousin, brother, and ancestor. Hebrew has a very small vocabulary, so only a few Hebrew words carry all of these modern meanings. The Hebrew words for “son” means son, grandson, great grandson, and descendent. For example, Genesis 29:5 refers to Laban the son of Nahor but we know that he was the grandson. Similarly, “father” means father, grandfather, great-grandfather, and ancestor. We find in Genesis 28:13 that God tells Jacob, “I am the LORD, the God of your father Abraham and the God of Isaac,” (emphasis added) but Abraham was the grandfather of Jacob. “

I have checked the above claim on other sources and it appears legit.  The meanings of these words identifying familial relationships were simply different at the time of their writing.  It doesn’t exclude the possibility of direct parentage but that isn’t the only potential meaning either.

Furthermore, since the text itself doesn’t teach on such matters there really isn’t much else to appeal to.  With nothing else to go on I would lean towards the traditional understanding but the fact is it can be proven that telescoping does exist in scripture when different genealogies of the same periods of time are compared against each other.  See another quote from the same article. 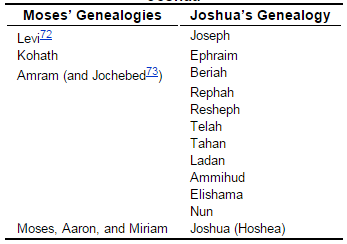 Please review the source that I am quoting from, it is not as reputable as others I could have used but I highly respect his analytical work, even on articles that I disagree with.  Based on the above I argue that since the text allows for telescoping in the words for “son” or “father” and since telescoping can be proven in other genealogies, it is entirely possible that telescoping was also done with the Patriarchs as well.

Some argue that the word “begat” found in the patriarchal genealogies negates telescoping, but just as with the words “son” and “father” this isn’t necessarily the case.

“The word “begat” is another word that is commonly used in biblical genealogies. (The NIV translates yalad as “became the father of” or “gave birth to.”) Like father  and son, this word has a much broader meaning than the corresponding English usage (Vine’s, “to bear”). An example of this broader usage is found in Deuteronomy 32:18, where God reminds Israel that He “begat” them. Similarly in Numbers 11:12, Moses declares that he had not “begotten” Israel and hence was not responsible for them.”

There are other broader uses of the word “begat” that can be found in scripture, if you want a comprehensive listing I recommend checking out the article that I linked to above.  Ultimately, my conclusion is that telescoping of the Patriarch Genealogies is a real possibility.

Particularly I would identify the time period between Noah and Abraham as the greatest possibility of extensive telescoping.  There isn’t a great deal that happens in this time relevant to the Biblical narrative, except for of course the Tower of Babel.  Also I find it rather unlikely that enough people would have been born from just Noah’s three sons in only 5 generations to form the small nation we see building the Tower of Babel in Genesis 11.  If a great deal of time precedes and/or follows the Tower of Babel it could place the first 11 chapters of Genesis in a pre-historic time period.

How much telescoping do I think is possible?  Well I would put 6000 years since the fall at the absolute minimum.  Though I think it is unlikely it is certainly within the realm of possibilities that there is no telescoping at all.  On the other end of that I would put 100,000 years as the absolute maximum, just as unlikely as the alternative I mentioned above.  The reason I select that amount is it is the highest number I have ever heard from reputable proponents of this theory.  I don’t personally care what the exact amount of time is, but it is helpful to have a shot group to work with.  The bottom line is we just don’t know how long it has been since the fall.

What do you think?  Am I way off base here or do you think I have presented a fair analysis?  I would personally classify this topic as well within the range of Christian freedom to agree or disagree on as there is no clear scripture either way.  So if you think I am wrong let me have it in the comments.  If you think I got it right but missed something important please let me know about it.

I am a layman who blogs my Biblical studies. Enjoy, please read with an open Bible and do double check with your pastor.
View all posts by ACTheologian →
This entry was posted in Armchair Lounge and tagged Age of the Earth, Patriarchs, Telescoping. Bookmark the permalink.

2 Responses to Age of the Earth