Posted on September 25, 2015 by ACTheologian 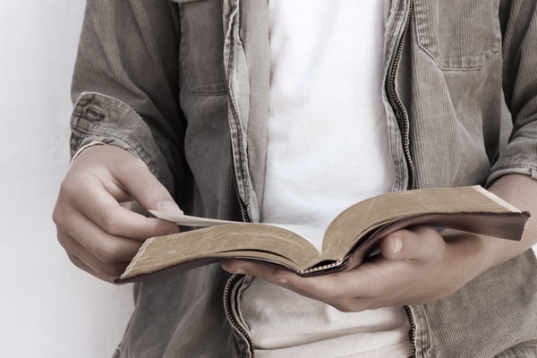 This is the fourth post in a series on principles of Biblical interpretation for the previous entry please click HERE.

For starters, we actually see at the outset of scripture that the Old Testament promises to be very unclear.

“And he said, Hear now my words: If there be a prophet among you, I the Lord will make myself known unto him in a vision, and will speak unto him in a dream. My servant Moses is not so, who is faithful in all mine house. With him will I speak mouth to mouth, even apparently, and not in dark speeches; and the similitude of the Lord shall he behold: wherefore then were ye not afraid to speak against my servant Moses?” Num 12:6-8 KJV

Here we see that Moses spoke to the Lord as “mouth to mouth” but the same is not promised for the prophets that follow.  Instead they receive:

“I have also spoken by the prophets, and I have multiplied visions, and used similitudes, by the ministry of the prophets.” Hos 12:10 KJV

1. Likeness; resemblance; likeness in nature, qualities of appearance; as similitude of substance. Let us make man in our image, man in our similitude. Fate some future bard shall join in sad similitude of griefs to mine.

2. Comparison; simile. Tasso, in his similitude, never departed from the woods. See Simile.

Paul even clearly states that the Revelation given to him was “not made known to the sons of men in other generations” but that it “was revealed to his holy apostles”.

“…. When you read this, you can perceive my insight into the mystery of Christ, which was not made known to the sons of men in other generations as it has now been revealed to his holy apostles and prophets by the Spirit. This mystery is that the Gentiles are fellow heirs, members of the same body, and partakers of the promise in Christ Jesus through the gospel.” Eph 3:1-6 ESV

In his letter to the Corinthians Paul makes the same juxtaposition in chapter 13.

Keep in mind not only was the New Testament still being written when Paul wrote the above text, but it would be many years until the canon was considered closed and many years still until the Church would even realize this fact.

Even still Paul describes what they have at the time as:

Then he says what is coming is going to be:

“then shall I know”

Some time after Paul wrote this the office of Apostle, prophecy, gifts of tongues, interpretation of tongues, and words of knowledge left the Church.  What we have instead is something Paul calls “perfect” which is the clearest words of God ever delivered to this planet, the New Testament.

Before moving on to typology I would like to place an extensive quote here from  Present Truth Magazine, Vol 12 Article 2.

The same principle applies to the handling of Old Testament prophecies. Those prophecies are not self-interpreting. Some people pride themselves that they can understand these prophecies if they simply take them “literally.” And without consulting the interpretation of the New Testament, they arrive at all sorts of fantastic things which are supposed to happen in modern day Palestine. A prophecy may or may not be meant to be understood literally. For example, Isaiah declared that God would put a foundation stone in Zion, one that would support a building in time of wind and hail (Isa. 28:16). He does not say he means that the stone is a person. It is a veiled prophecy of Christ. We need the New Testament to interpret it for us. The same prophet speaks in terms of a highway building program in the desert to make a way for the King of Israel (Isa. 40:3, 4). Few would be foolish enough to see this being fulfilled in the freeways which the Israelis are now constructing in the new State of Israel. The New Testament authoritatively interprets the prophecy for us as meaning the mission of John the Baptist. Malachi 4:5 speaks of Elijah’s coming before the day of the Lord. No intimation is given that it is not to be taken with strict literalness. When we read the New Testament, “Elijah” turns out to be John the Baptist.

The prophet Amos writes about the time when God would “raise up the tabernacle of David that is fallen . . . and . . . build it as in the days of old.” What does this mean? The rebuilding of Solomon’s temple? The New Testament interprets it for us. This took place in the outpouring of the Spirit in the raising up of the Christian church (see Acts 15:16).

Not only does the New Testament show us how to interpret the prophecies of the Old Testament, but it shows us how to interpret the laws of the Old Testament. The New Testament shows us how the laws of ceremony have met their spiritual reality in the person and work of Christ. But not all the laws found in the Old Testament are ceremonial in nature. Some are moral, and their moral principles are perpetually binding. The apostle Paul refers to a number of them as a rule of life for Christians. The Sermon on the Mount interprets the moral precepts of the Ten Commandments and, instead of lessening their binding force, strengthens their demand for holiness (see Matt. 5:17-28). Jesus claimed the authority to interpret the law. When a dispute arose about proper observance of the Sabbath, He claimed His Lordship of the Sabbath (Mark 2:28) and interpreted the law to allow for works of mercy and necessity to be performed on the Sabbath.

All this goes to show how important it is that we allow the New Testament to interpret the Old Testament.”

Furthermore, what we have in the Old Testament is types and shadows pointing to the anti types and fulfillment found in the New.  To see this we need to understand the material principal taught to us by Christ for unlocking the Old Testament.

Search the scriptures; for in them ye think ye have eternal life: and they are they which testify of me. John 5:39 KJV

And beginning at Moses and all the prophets, he expounded unto them in all the scriptures the things concerning himself. Luke 24:27 KJV

Not to put too fine a point on it Christ is telling us that revelation in general, and the Old Testament in particular is speaking of himself.  Below is a quote from “A Study on Eschatology and Millennialism A Report of the Commission on Theology and Church Relations of The Lutheran Church-Missouri Synod September 1989“.  Though the topic of the paper is on eschatology, there are some really good points with regards to typology found on page 11.

“A type is a person, institution, or event which prefigures and foreshadows a new and greater reality (the antitype). The antitype historically and theologically corresponds to, elucidates, fulfills, and eschatologically completes the type. The antitype is no mere repetition of the type but is always greater than its prefigurement. And since the Scriptures are Christological, the Old Testament’s types (which are so indicated by Scripture) are related to, centered in, and fulfilled in Christ and His people, the church.”

This hermeneutical understanding of scripture brings great light and clarity to the overall body of biblical text.  For example, David is not a personal lesson on how to overcome the “goliaths” in my life.  David was a type of Christ, though he was lesser than the antitype to come he prefigured Christ in his time by conquering Goliath with five stones.  In a greater manner Christ conquered sin, death, and the devil with five wounds on the cross.  This is a pattern seen throughout the whole old testament.  To graph them all would take years of study and each more than merits a blog post unto itself, however I can paint a picture with a few that pop out the most.

I am a layman who blogs my Biblical studies. Enjoy, please read with an open Bible and do double check with your pastor.
View all posts by ACTheologian →
This entry was posted in Armchair Lounge and tagged Authority, Bible, Biblical, Christ, Christian, Cross, Dividing, Doctrine, Faith, Truth, Word. Bookmark the permalink.